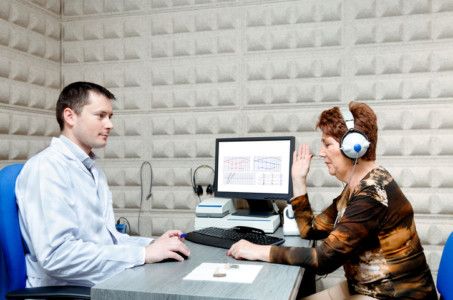 With increasing age, the human body degrades in every respect. The best examples are a loss of vision or the beginning of hearing loss.

But while, for example, declining vision and the associated purchase of glasses is considered completely normal, many people find it difficult to accept declining hearing. It forms the most important bridge to other people.

Natural hearing loss begins at about 50 years of age

The loss of normal hearing sets in so gradually that most people don’t notice it at first. The first sign is often that the music and television are turned up a little louder than before.

However, the human brain is very adaptable: If a few words are not understood in a personal conversation with others, the brain can usually make sense of the rest of what is being said.

It is only when the number of missing words increases that those affected realize that they do not actually know what the other person is talking about.

By this time, friends and relatives have often noticed that the affected person no longer understands them correctly or gives incorrect answers to questions.

Unfortunately, they often remain silent because they do not want to hurt the affected person. It would make sense to make him aware of the hearing loss at an early stage. The sooner it is compensated for, the fewer restrictions the affected person ultimately has to accept.

Instead, a negative spiral is often set in motion that ends with a retreat into the private sphere. First z. B. Visits to the cinema and theater are avoided because what is said is no longer properly understood, later also private meetings with friends.

While glasses are generally well accepted, many people still find it difficult to wear hearing aids. Particularly among the older generation, there is still a questionable image that acoustic nonunderstanding (combined with the question „What??“) equated with obtuseness or stupidity.

The hearing aid is rather hidden discreetly under the hairstyle, than worn openly visibly to make others aware of the existing hearing impairment (and thus also demand consideration).

The demand for invisible in-the-ear devices is also much higher than that for more powerful behind-the-ear devices. However, the more people are self-confident about their hearing impairment, the more society will become aware of it and the more understanding and help will be given to those affected.

Many devices connect wirelessly to the TV, stereo system and/or smartphone, transmitting voices directly to the ear.

How wide the spectrum is nowadays is illustrated by this article about Widex models.

These are simple hearing tests that can basically check for hearing loss. Anyone who believes that their hearing has deteriorated, or who has been made aware of this by friends, should undergo such a hearing test.

The hearing aid acoustician plays sounds over headphones at different volumes and frequencies. In this way, he can get an idea of the volume and frequencies at which the affected person’s hearing is below average.

If there is a hearing loss, he can suggest that the person concerned visit an ear, nose and throat specialist, who will carry out a more thorough examination of the ears. This is paid by the health insurance.

The ENT doctor will then issue the prescription for a hearing aid (unilateral or bilateral) if necessary, with which the affected person in turn goes to the hearing aid acoustician.

This will then individually adjust the hearing aid. In contrast to glasses, a major advantage of hearing aids is that their settings can be changed again and again, e.g., to suit the patient’s hearing. B. if the hearing loss continues to progress and the device „louder“ must be set.

What does the health insurance contribute?

Theoretically, it is possible to get a hearing aid for free. The health insurance companies pay a fixed amount of 784.94 euros for the first hearing aid (current status 2018). However, this is only sufficient for a very simple device.

For higher-quality devices and for more extensive hearing problems, the rest must be paid out of one’s own pocket. By the way, every six years those affected have the right to a new hearing aid, since technical development is constantly advancing and each new generation of hearing aids offers additional comfort.

The gain in quality of life through the return of good hearing, on the other hand, is priceless. It is therefore definitely worthwhile to have your hearing checked as soon as you suspect progressive hearing loss.