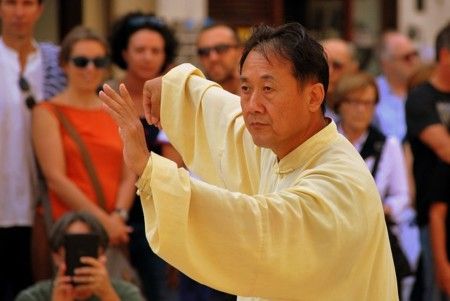 Chinese medicine considers it very important for the preservation of the patient’s health that he lives in harmony with his life forces.

In China, this is achieved, among other things, through specific breathing and movement exercises, Qi Gong and Tai Ji Quan. Qi Gong means the „practicing Qi“, which expresses that the practitioner practices the handling of the life energy in awareness of the Qi. What does Qi awareness mean in concrete terms??

Chinese medicine – Living in harmony with the forces of life

In the West today there are no comparable exercises and also no ideas of a life force in medicine. Even 150 years ago, Hufeland, the important physician of the Romantic period, personal physician of Goethe, dealt in his main work with the topic „prolonging life“.

Essential for the attainment of a long life for Hufeland is the preservation of „vitality“ until old age, the central theme also for Chinese medicine in ancient times.

Most people in the West live little consciously with their body, their feelings but also with their psychological life issues. How does this unconsciousness manifest itself?? People live mostly outwardly directed, i.e. extroverted, their consciousness constantly preoccupied with either the past or the future.

They are arrested to past events or feelings that have not been sufficiently processed, hence the mental adhesion to them. Or else the consciousness hangs with constant thoughts in plans or in fears of future situations.

Why is this unconsciousness, this clinging to the past or the future so problematic, even often pathogenic?

Many people do not become aware of fatigue and eventually exhaustion, or keep ignoring it with the will focused on the current tasks.

Disregard and abuse of the body, the feelings, the psychic needs avenge themselves through illness. Illness often brings people back to the reality of the „here and now“, to pain or to a painful feeling.

Chinese medicine knows many methods, starting from Qi Gong and Tai Ji Quan to acupuncture, these therapy methods lead to a „going within“ to a focusing of the consciousness on the present and on the space of the body and its feelings.

In acupuncture therapy, for example, by lying on the needles for 15-25 minutes, the patient is focused on himself, feels his body more consciously and the feelings in it.

The process of „going within“ and thereby becoming more conscious should be practiced by the patient at home several times a day. For this there is step by step Procedure to be practiced first with the patient, z.B. In connection with acupuncture therapy.

The patient is prompted after the acupuncture needles are placed:

2. to come to rest inwardly,

3. Breathe calmly, deeply into the chest and slowly out again. Exhalation is slower than inhalation. Relaxation during prolonged exhalation is of particular importance.

4. To go into the body; to feel the body – first the whole body, then successively the head, neck, chest, abdomen, pelvis, and finally the shoulder girdle with the arms, and the legs; each body region for 20-30 seconds at a time.

6. In the next step, the patient should concentrate intensively on the region of the body where his disorder or illness is localized. With all his focused awareness, he should go to this region, z.B. into the pain district of the head, and perceive them intensely, the size, the boundary, the density or even the color perception in this district but also the feelings z.B. Sadness, anger or fear, which can be perceived in this region. This is a process that should take 5-10 minutes at first.

7. The patient is then asked to breathe into this region.

These steps help to focus the attention in the body, to perceive it intensively at present. In contrast to Western medicine, which usually tries to z.B. to eliminate pain with analgesics, here it is a matter of becoming aware of the disorder and its cause. Consciousness has a pronounced healing effect.

The „going inward“, the reflecting on the „here and now“ of the body and its feelings, lets the person feel his current needs, z.B. Fatigue and need for sleep, better perceive and live out.

In this way, one instinctively learns what is relaxing and harmonizing and what causes tension and discomfort. This is recognized in the early stages of tension, and not only when the tension has turned into pain and takes over the entire consciousness.