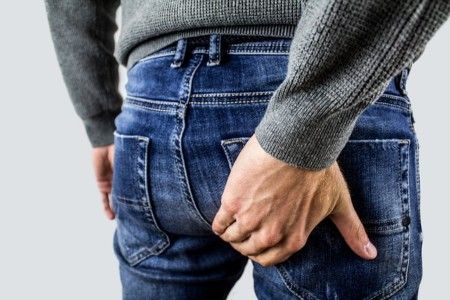 Hemorrhoids and hemorrhoid protection, an often heard topic and maybe you yourself or were acquaintances also already affected by it.

People like to make fun of this in casual conversation, but those who have to deal with problems in this area are probably not so good at laughing about it.

For many, discomfort here is also rather an embarrassing topic, which one discusses only reluctantly or not at all in public.

It can actually happen to anyone. With the right knowledge of the subject and simple natural hemorrhoid protection, they could perhaps be prevented.

Enlarged hemorrhoids can often be caused by hard stools, constipation or straining during bowel movements.

To prevent problems with bowel movements from the outset, it is particularly important to eat a diet rich in fiber.

These important dietary fibers are only found in plant foods. However, animal food does not contain. Dietary fiber promotes digestion and serves as a swelling and bulking agent.

In addition, they help prevent the concentration of fat and blood sugar in the blood from increasing too much. The body cannot utilize this dietary fiber.

They are excreted again undigested in the stool. Along the way, fiber binds water, thereby swelling and regulating digestion.

In addition to fiber, a sufficient supply of fluids is necessary. So should drink at least two liters a day.

Water is best suited for this purpose. But fruit juice spritzers, fruit and herbal teas also go if you prefer flavored drinks.

A healthy diet is a big factor in this issue, but you can also prevent enlarged hemorrhoids with regular exercise. Sports that do not strain the pelvic floor are suitable.

So one can recommend for example walking, swimming in addition, cycling. It is also optimal to avoid and reduce overweight.

The right behavior during bowel movements

It is best to take the necessary time on the toilet. Neither rushing nor pressing too hard is recommended. However, sitting on the toilet for hours does not help either.

It is best to use soft toilet paper for cleaning. Also should be dabbed more carefully than rubbed. Disposable washcloths and water are also good for cleaning.

Does age play a special role?

Hemorrhoids occur most often between the age of 30. and 60. Year of life on. However, some can of course also form at any age.

During and after pregnancy, the occurrence of hemorrhoids can be favored by the pregnancy-related widening of the vessels and by the increasing pressure from the uterus and from the child.

Hemorrhoids can also develop or worsen during the expulsion phase of childbirth.