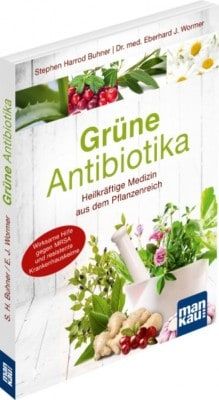 Science and medicine are at a loss in the face of the so-called „resistance catastrophe“ which is causing diseases long thought to have been defeated to recur. Dr. med. Eberhard J. Wormer’s guidebook „Green Antibiotics“ tells the story of modern antibiotics. It provides the only remaining response to infections caused by multidrug-resistant germs.

Modern antibiotics are rightly considered a milestone in medicine. But their effectiveness has been grossly overestimated. The „war on germs“ proclaimed 60 years ago – with the Nobel Prize for the discovery of penicillin – was doomed from the start, because the biological intelligence of microorganisms is and remains invincible.

The new book by health expert Dr. med. Eberhard J. Wormer looks at the current state of the resistance problem and shows that plant-based antibiotics are a promising, natural alternative for treating potentially deadly infections.

The lost war against germs

Epidemics or pandemics triggered by parasites, bacteria and viruses make the headlines again and again and with increasing frequency. Ebola, H5N1, malaria, old known tuberculosis bacilli as well as MRSA and other hospital germs cause deadly infections for humans and animals.

The capitulation of medicine and science in the face of the power of germs took place almost 20 years ago – since then, no significant progress has been made in antibiotic research.

Already in his Nobel Prize speech of 1945, Alexander Fleming, the discoverer of penicillin, warned that resistance to this remarkable cure could develop. In fact, every other antibiotic since then has been shown to be resistant in a relatively short period of time.

Mass, often improper use in humans and animals even increases the likelihood and accelerates the development of resistance – especially because prevention, hygiene and control measures are ignored. Due to their use in meat production, antibiotics are now part of the food chain and even present in drinking water.

Consequently, their effect is increasingly weakened or they are completely ineffective. Every year in Germany, about 40.000 people from hospital-acquired infections, of which 10.000 caused by antibiotic-resistant germs.

Solutions to the resistance problem

Do we have to accept that in some cases there will be no hope of a cure with antibiotics for life-threatening infections?? First of all, according to Wormers and other medical experts, a rethinking process must take place: „Microorganisms, bacteria and viruses are not ‚evil enemies‘ of humans. We should stop trying to wage war against them.

Bacteria are useful co-inhabitants of humans. We should think of them as partners.“ In concrete terms, this means learning from the struggle for survival in evolutionary history and looking to where all modern antibiotics come from: Because bacteria, fungi and plants contain a potential for action that effectively helps humans fight off infections with multidrug-resistant germs.

As far as infectious diseases are concerned, we need to revert more to old-fashioned methods: Isolation of infected people, hygiene measures, environmental cleanup, moving away from factory farming and pesticides, sanitation of infectious foci, and the use of herbal remedies.

For this we need patience, more time, care and trust in our biological nature. „Ultimately, the resistance problem is also an appeal to review and change our lifestyle“ is therefore the conclusion of the author.