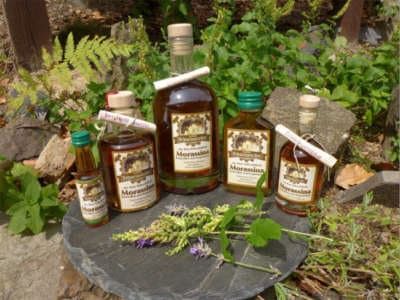 The knowledge about and the handling of mining, medicinal herbs, Burnt water (pig-driver), Wine and medicine belong to the probably oldest traditions of the Morassina place Schmiedefeld , which it applies to receive and again revaluate, because the first settlers came because of the mining into our area.

Johann Gottreich Unger was one of the first blacksmiths who was a herbalist, healer, laboratory technician and hustler in one person.

Pig driver, a Brew from the sulfur hole in miner’s style

The ancient miners not only listened to its secrets under the earth, but they understood their habitat as a unity of nature, man, real knowledge and perhaps also as a kind of supernatural inspiration. They observed their surroundings and gained a high level of experience, which benefited practical work in their environment.

From it they developed an elixir, to which they gave the name Schweinstreiber (pig-driver). Thus Schweinstreiber stands as a name for a very old recipe of those who made the place Schmiedefeld directly in the center of the Thuringian slate mountains their home.

Schweinstreiber, the Viagra of past times

Word quickly spread that Schweinstreiber was not only helpful for indigestion and digestive disorders. Because of its potency-enhancing properties, it became more and more talked about, especially among insiders. Today the connoisseurs say: Schweinstreiber was the Viagra of the time. It is said that many attempts have been made to unravel the mystery of its effects. There is even talk of bribery and blackmail.

In addition to the list of its composition, the individual steps of preparation are also described in detail. And that the miners or the staff of the vitriol factory Morassina in the sulfur hole played a special role in it, is likewise delivered. They knew the effects of local spices and medicinal herbs as well as iron, vitriol and sulfur.

A series of exquisite spices and other carefully selected ingredients, combined with alcohol and acidic Morassina water, trigger processes that release health-promoting ingredients, essential oils and fragrances. These give the Brew its unmistakable taste with the historically incontestable name Pig Driver.